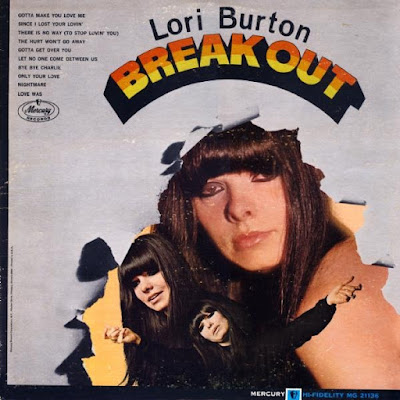 Another “guilty pleasure” here, I guess, but I think this one has universal appeal, nonetheless.  At the very least, it provides me the chance of accusing the naysayer of not having a dick instead of no sense of humor.  So who decided it was sexy for a female vocalist to sound like she’s singing through her nose?  Not me—the female vocalists of today are fucking terrible and so are the mentally retarded imbeciles who write their shit music.  No, Lori Burton had a husky, sensuous set of heavy pipes, filtered through a New York City accent, with just a touch of sleaze and snarl.  The gal could write a song, as well, and this LP was a showcase of tunes she wrote with another female songwriter named Pam Sawyer.   Actually, both women went on to more successful songwriting careers writing for Motown, several individual groups such as Young Rascals, and doing session work with some of the biggest names in the business, while this record tanked and has remained relatively obscure.  There are some nice, unappreciated gems on here that deserve a brighter place in the sun.  Boyd Rice later featured “Love Was” on his “Music For Pussycats” compilation and the entire LP was remixed and briefly re-issued on CD with a handful of Disco songs she did in the 70’s that, apparently, aren’t so great.

What we have on this LP are some late 60’s Soul / Pop / Rock songs, done in the style of the time, short and sweet, sung by a white chick.  A couple of the songs are a little kitchy and sound like a rip-off of other hits of the day, while others are excellent, with songs like “Gotta Make You Love Me”, “Love Was”, “Nightmare”, and “Gotta Get Over You” topping the list.  Sadly, as the younger generations of music listeners appear to have no interest in this sort of thing, these songs are probably doomed to fade into oblivion, although I wouldn’t be surprised if, forty years from now, some nursing home attendant found herself prying this LP from my cold, dead hands.